For decades astronomers have theorized that like our Moon impacts our tides, over tens of thousands of years our closest and largest planets in our solar system (Venus and Jupiter) have influenced Earth’s climate. Since Serbian astrophysicist Milutin Milanković hypothesized his Earth orbital-cycles of variations in the 1920’s affected Earth’s climates, there simply hasn’t been any sufficient physical proof for his cycles theory. Until last month.

With the further advanced technology and methodologies used on geological formations and strata (magnetostratigraphy) in correlation with the Newark–Hartford APTS (Astrochronostratigraphic Polarity Timescale) published May 7, 2018 in the Proceedings of the National Academy of Sciences, now:

…provide[s] empirical confirmation that the unimodal 405-kiloyear orbital eccentricity cycle reliably paces Earth’s climate back to at least 215 million years ago, well back in the Late Triassic Period.

This conclusion was based on the geological research of three different cores:  two from two different sites of ancient lake beds in New Jersey and New York, and one rock core 1,500-feet long from the Arizona’s Petrified Forest National Park.

The geologists noticed that lake sediment cores would disclose a consistent pattern of ancient lakes drying up then refilling over the course of hundreds of thousands of years forming different geological strata. This suggested cyclical changes in climate. The difficulty was that at the time they lacked the extensive methods to accurately date those climatic shifts. Fortunately, the Arizona Petrified Forest core, contained layers of ash from volcanic eruptions. These could definitely be dated because they contained radioisotopes.

Scientists compared and aligned the Arizona core dates to the NJ-NY ancient lake cores using bands found in all of the cores, indicating reversals in Earth’s magnetic fields. Yes, “reversals”! This allowed them to more precisely study the records. The analysis then demonstrated that the climate swings did indeed take place every 405,000 years for at least the last 215-million years, which is back through the Late Triassic Age when dinosaurs walked the Earth.

What does all this have to do exactly with Venus and Jupiter? Understanding gravitational forces by mass, Venus — the closest planet to us at 24-million miles — tugs us slightly closer to the Sun, and Jupiter — the largest planet in our solar system at 318-times more massive than Earth — tugs us slightly further from the Sun. At the peaks of those infrequent elliptical orbits, Earth has indeed historically experienced (the last 215-million years) hotter summers and colder winters with more extreme times of rain-flooding and dryer droughts 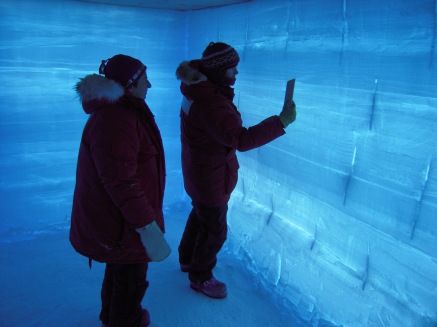 Scientists can now link changes in the climate, environment, dinosaurs, mammals and fossils around the world to this 405,000-year cycle in a very precise way. The climate cycles are directly related to how the Earth orbits the sun and slight variations in sunlight reaching Earth lead to climate and ecological changes.

Beyond Earth’s ancient past and astrophysics this study is a substantial breakthrough for the methods in which geologists are able to date cores and present a reliable more accurate timeline of Earth’s geologic past. It will also assist in many other scientific domains!

Paleontologist of the University of Edinburgh, Dr. Steve Brusatte:

[With the aid of APTS and newest magnetostratigraphy it] is a really important study for clarifying the Triassic timescale and untangling the sequence of events that occurred as Pangea began to split up and the dinosaurs originated and then diversified. It’s mostly a study of how to tell geological time rather than of how changes in climate relate to evolution.

Most people want to know the more immediate concern: Where are we currently in the Venus-Jupiter climate-cycle? And could Venus’ and Jupiter’s tug-cycles be responsible for our current climate-changes?

Bad news climate-change deniers. Astronomers and astrophysicists calculate that we are about in the middle of the 405k cycle. Earth’s orbit is very close to circular, not elliptical, and presently not near enough to cause disruptions in climate or global warming. The changes we have been experiencing come from some 238-years of outsized human output and input in the release of greenhouse gasses.