This newly-discovered nematode or worm (2019) called Auanema sp has three sexes! Like a kangaroo it carries its offspring in a pouch and is so resilient it can survive 500-times the lethal human dose of arsenic! Yes, you read it correctly, THREE SEXES! Once again and over and over with more time and constant scientific exploration, research, and new shattering paradigms of existence we find Nature on this spectacular planet to be everything BUT binary, black and white, or Monistic, i.e. that everything leads back to or is a derivative of “the One!” No, life here is in fact ever more pluralistic and endlessly diverse as science finds year after year, century after century. 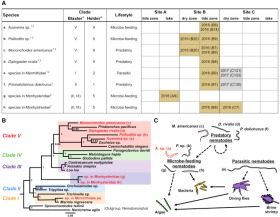 Auanema sp was found by Cal-Tech scientists in Mono Lake, California, and published this past Tuesday in the academic journal Current Biology. From Maddie Bender of VICE.com and James S. Lee, researcher at Rockefeller University and the Division of Biology and Biological Engineering at California Institute of Technology:

The worm has multiple reproductive organs on its body, with some members possessing male or female parts exclusively, and others with both—a rarity for a single species. Not only that, but it hatches its young within its uterus and keeps them safe inside its body before live-birthing them later. In contrast, most nematodes lay their eggs and leave. Lee said he and the other authors believe the worm births this way to shelter its young before they “go out and face the harsh world” of Mono Lake, which is known for its high levels of arsenic.

“The cherry on top of all of that is that it can survive 500 the human lethal dose of arsenic, which is quite fantastic,” Lee said.

He said that when the researchers tested this ability in the lab, they expected to see the worms die off as the concentration of the lethal chemical was increased, but they didn’t. To make sure the arsenic was working, they also cultured run-of-the-mill nematodes, which died off at the expected rates.

“That was a sign that our arsenic was working, but our worms were working even harder,” Lee said.

In the study, researchers compared the genome of the worm to its relatives to try and figure out where its unique traits might have come from. They found that two relatives from France and Germany shared the ability to resist arsenic, even though they were not from environments with high arsenic levels. This led the group to believe that the worm ancestors that first came to Mono Lake already had some potential for arsenic resistance, Lee said, and their ability was honed over time.

While they are the most abundant animals on the planet, nematodes comprise only around 1,000 cells each. (A human, by comparison, has 37.2 trillion cells.) In many ways, though, humans should be looking up to these worms, Lee said.

“They’ve got a tremendous amount to teach us about how to survive on this planet in some of the most harsh desolate regions, and they do it all with such a limited toolkit.” 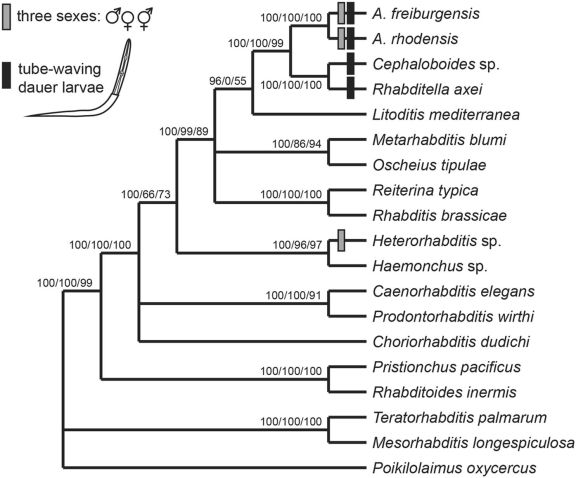 Discovering species like the Auanema sp and many other organisms in extreme locales or in our conventional environments, Lee goes on to say:

“It’s tremendously important that we appreciate and develop a curiosity for biodiversity,” he adds, noting that the team had to receive special permits for their field work at the lake. “The next innovation for biotechnology could be out there in the wild. A new biodegradable sunscreen, for example, was discovered from extremophilic bacteria and algae. We have to protect and responsibly utilize wildlife.”

Wildlife indeed Mr. Lee. It is most exciting and intriguing that as far as sexes and genders go, ‘the sky is the limit’ on this Pale-blue rock we call home. The human body’s biology, its cellular makeup, its endocrine systems, and its neurological makeup are also showing us that the fuller, wider spectrum of sex is nowhere near as simple or crude as our Bronze and Iron Age ancestors once imagined! This is a delightful epiphany.