This first animal/human similarity/comparison is brought to you by my good friend Victoria NeuroNotes. If you’d like to get highly informed about all things behavioral neuroscience and its effect on the human brain, there’s no better place to go!

I asked Victoria if she’d like to do one S/C, but in perfect accord to her excitement — mostly because she is not only highly entertaining but very attracted to me 😉 — and her thorough knowledge of human behavior, including my ego…she shared two canine similarities and one prairie vole similarity, for a total of three! I get the feeling that her first, domesticated(?) male Dogs, is perhaps a direct hint at men in general and maybe one in particular? *chuckles*

Here is her first of the canine similarities:

“Here you go PROfessor. Dogs, in particular male dogs, can be very much like male humans in the mating game. :D”
(line break)

“I should also note that this article is 9 years old and a lot has been discovered about the neurohormones, oxytocin and vasopressin, since then.

I also relate to the wolf — perhaps more so than the prairie vole below because — the wolf’s attributes (according to Native Americans) are:
** They are forerunners of new ideas who return to the clan to teach and share medicine
** Loyalty – wolves mate for life and have a strong sense of family
** Community oriented – the entire pack cares for the young
** Individualistic
** Teachers
** Extreme intelligence
** Very rarely attack humans”

And last, her other animal similarity:

“Only about 3% of the animal kingdom share this [monogamous] behavior, which makes me a rarity. 😉
Prairie Voles — they are pair-bonders and mate for life.
(line break) 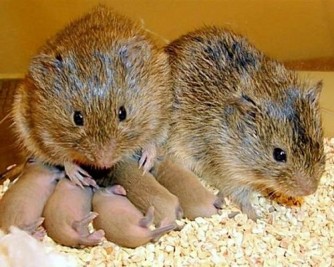 Some studies say 3 to 5 percent. I should mention that this is among mammals. But, if you will note the last sentence of the last paragraph in this article — Wild Sex: Where Monogamy is Rare…

“monogamy in the animal kingdom might be rare, but it is anything but boring.” 😀 “

Many thanks Victoria for your choice of animals! Feel free to share your thoughts about Dogs, Men, Wolves, and Prairie Voles below and how similar or contrasting you think they are to us!