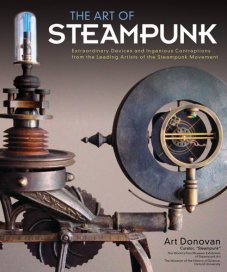 Art Donovan is an innovative designer of Steampunk lighting.  He also happened to be the Curator of the “Steampunk + Contraptions Extraordinaire” exhibition at the Museum of the History of Science at Oxford University, UK. that was on exhibition October 13, 2009 through February 21, 2010.  Though the exhibition is long gone, Steampunk has only gained more popular momentum thanks to Donovan.  Art’s new book The Art of Steampunk is already the most popular book on Amazon.com in its category.  Before showing some of Donovan’s remarkably mind-blowing illuminating pieces, let us first take a peek back into the museum’s show.

The exhibition brought accomplished artisans and their contraptions from four continents:  Asia, Australia, North America, and Europe.  These designers were chosen by Donovan and Museum Director Dr. Jim Bennett as the creme-de-la-creme of the Steampunk aesthetic.  If you are new to the art form, you might ask what is Steampunk?  That is a question Donovan is asked all the time.  On my own Steampunk page here I take a photon-shot at describing Steampunk, but being the expert Donovan’s definition, Notes From A Steampunk Curator is more precise and true:

Regardless if an artwork is actually called “steampunk” the work in question must be transcendent.   The artwork must be evocative and unique even if it does not fit in to a formal category.   True Steampunk Art would be an artifact of grace and artistic ingenuity.   It would at first pay homage to the antique arts and sciences but ultimately point to a ideal or concept  greater than itself.    As an aside  most of the artists in my Bridgehampton exhibition in 2008 and in Oxford 2010 were not actual Steampunk artists but rather artists who are embraced by the enthusiasts of Steampunk.  Their artwork then becomes “steampunk” by default and represents the genre in the best of ways.

From the museum’s exhibition weblog, here are some sample photos of the many magnificent displays and their creators.  To visit each of their own sites go to The Steampunk Art & Design website.

A total of eighteen inventors were present at the MHS exhibition.  It all came about when Donovan talked at length with museum director Jim Bennett and both agreed that Steampunk finds most of its technical and aesthetic roots in 19th century Victorian sciences; it was a natural fit for the museum.  Bennett told Donovan that he was also the one who should curate the exhibition.  It was a happy successful marriage.  The museum’s attendance and the public’s interest in the science-genre reached record numbers for Bennett.

Since discovering Steampunk in 2007, Art Donovan has jumped in the steampunk lighting-design market with exquisite creativity.  When asked how the Steampunk style fits into the repertoire of his other work, he states “It doesn’t fit in at all — totally from left-field.”  Because it is so kooky and original, Donovan has developed a deep fondness for the style.  “It’s like starting from the beginning,” he explains, “only this time I’m no longer concerned about what’s in and out of style.  Artistically, it’s just so liberating to work like that!“

Donovan’s and Bennett’s show received world-wide attention.  Writers, journalists, reporters, and photographers from China to Australia, from Spain to Indonesia to Canada generated articles of the zany devices displayed for four months at Oxford University.  Even Time Magazine took note of the science-subgenre in December 2009:  Steampunk: Reclaiming Tech for the Masses.  And the public attraction shows no signs of subsiding.

Donovan Design, Art’s and his wife Leslie’s company, began as he started specializing in handcrafted custom light fixtures and illuminated sculptures.  Much of Art’s fine work can be seen at the Hamptons Antiques Gallery in Stamford, Connecticut.  If Stamford is a bit out-of-the-way, do not worry.  Here is a short slide show of some of his most popular creations on display at the gallery.