The Scarborough Faire is a renaissance festival held every spring outside my hometown of Dallas, Texas.  It is a festival I try to make every year simply because it is an incredibly artsy event that panders relentlessly to my Bohemian tendencies.  One year as I, my then 15-year old daughter and 8-year old son were milling about the King’s Pavilion, a wondrously magical fairy named Twig caught my son’s attention.  With her wings glistening in the sunlight, she played her double-flute and danced gracefully our direction as if floating on air.  As she wound her way toward my son – who is a mega chick-magnet with his blue eyes and cutest smile – and with every step and note she further captivated him with her song and dance.  Even I had to confess how transfixing she was; my daughter began laughing semi-uncontrollably.  She had never in her young life seen two boys so completely hypnotized.  Fortunately for me my daughter’s continued giggles snapped me back into reality:  as the father, here was presented a life-lesson of enormous magnitude for my son!  I must act!

Then Twig stopped in front of him, smiled, and sprinkled pixie-dust upon his bedazzled head.  Game over. 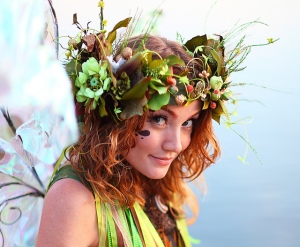 My son’s expression was…well, paralyzingly expression-less.  His eyes (and most likely his heart too) were glued to Twig’s every move.  My daughter still can’t stop laughing.  Realizing that any wisdom I tried to impart would fall on deaf ears, I turned to my still entertained daughter and helplessly said, “And now it starts.”  My son was experiencing exactly what I had learned years earlier…

I was a college soccer player training with my team in the Mecca-of-soccer, Rio de Janeiro, Brazil.  After a week of hard training and games at the Flamengo Futebol Club as well as other clubs, a few of us were ready for the nightlife.  Our hotel was less than two blocks from Copacabana Beach off Avenida Atlântica.  Just a mile or so down the avenue was Ipanema Beach.  Along the two beaches were many restaurants and bar & grills where you could sit outside.  I and two other teammates decided to go the center of the two beaches toward Ipanema, have some beers, and meet some hot Brazilian girls.  We ordered, began drinking and enjoyed the non-stop scenery.

By the way, my daughter is fond of these two father-brother stories because she enjoys a huge boost of confidence every time they are told.

After many failed attempts to continue conversations with the female persuasion, it was obvious we had to improve our Portuguese.  We needed to learn more than just “I’m an American futeboller” and “I don’t speak Portuguese.”

Somewhat dejected and tipsier we headed back to our hotel.

What had gone wrong?  All during our first several days, Brazilian girls would constantly tell us “Eu te amo,” which means I love you.  As teenage boys that translated directly to “I will do anything you want me to, just say the words!”  Well, out at the pub we obviously forgot about that last part.  We couldn’t speak.  We mourned our misfortunes.

Then as if the love-gods pitied our sorrows, a group of five extremely gorgeous Brazilian women were headed toward us….a delightful collision course.

They made it abundantly clear they were interested.  They were saying all kinds of nice things, seductive things we were quite sure.  In the middle of all the obvious energy and excitement, my teammates and I looked at each other and exclaimed simultaneously, “We love this country and we LOVE easy Brazilian women!”  We were the American studs.  Finally, our greatest dreams were being realized, but we couldn’t say it in Portuguese.  Hoping to keep things moving forward, we told them “Eu não falo Português.”  Which as we were taught means “I don’t speak Portuguese.”  Major, major mistake.

“Whoa!” screamed my buddy “…that’s a little too friendly!”  They began getting much more aggressive right there on Copacabana Beach.  In fact, they had gotten SO friendly with the three of us my teammates took off running and didn’t look back.  Now I have all five of them swarming me!

The near 24-hour view along Copacabana & Ipanema

I’m thinking Okay, I know full well how attractive I am ladies, but let’s slow down, keep our hands in more proper places, and everybody will have a great time.  But how can I say that?  “Eu não falo Português” I repeated.  They quickly replied in English, “We go with you.  We love American men!”  And they showed it.  Again, big mistake.

The fact that they were all speaking with their hands THE “universal language” and describing the highly charged things they all wanted to do with me, quickly no longer mattered.  I drew up my fist and yelled STOP!  As “easily” as they started with us, they turned and walked away, giggling among each other.

When I caught up to my two laughing teammates, who completely abandoned me and the night’s mission, they asked “Have you checked your wallet?”

Needless to say, if I had had a wallet in each of my four pockets, they all would have been gone along with my pants.  The fact that later after reporting the incident to the Rio Police we were informed that those five “very attractive” women were well-known regulars on Copacabana and Ipanema, and the police thought it also necessary to tell us they were lesbians…professional lesbians, who knew how to work gullible boys.  Really?  They could’ve left out that last bit!

Have you lost your wallet again?

Which brings me back to Twig and my son and daughter.

As I stood there in the King’s Pavilion watching how enamored he was with Twig, I couldn’t help but appreciate the adage “Like father, like son.”  I too had once been warned of the expensive charms of a woman and could not listen….in Portuguese, English, or any language.

My daughter chimed in “Dad, just hand over your wallet for both of you.”