This past weekend and some days this week I have been keenly interested in heroes. Whether modern or older I have wanted to know a bit more and pay personal homage to ordinary people who through acts of selflessness and the highest valor and courage, sacrificed unquestionably their own self-benefit for others, for a greater good, for a greater number in the future. Some of these remarkable stories included many war heroes, men who willing put themselves in lethal danger in order to protect their Brothers in Arms, their squad, platoon, or battalion. Their acts of sacrifice are legendary and should never be lost to time.

But there are also other heroes who never fought in any war, or armed conflict, but the risks and dangers they willingly faced were just as daunting, just as consequential as a soldier faces in combat. Many of them are women of the 19th and 20th centuries. Their fight for equal rights, equal treatment, pay, and opportunities in patriarchal dominated societies across the globe deserve just as much awe, respect, and homage as any man’s stories of gallantry, valor, and sacrifice in war! Agreed? Of course you do if you are a fair and reasonable human being.

Some of the immediate names of female heroes that come to my mind are Eleanor Roosevelt, Susan B. Anthony, Rosa Parks, Billie Jean King, Malala Yousafzai, and a big one for birth-control Margaret Sanger who eventually laid the groundwork for America’s badly needed Planned Parenthood. However, the one specific woman I was reminded of this past Sunday and Monday was Emily Wilding Davison. If you are unfamiliar with Emily’s unwavering commitment to eliminating injustice and gender inequality, then watch this following 15-second clip of her public statement:

As part of my remembrance to many ordinary people who became extraordinary heroes for the betterment of humanity, I watched the 2015 film Suffragette with Carey Mulligan, Helena Bonham-Carter, Natalie Press, and Meryl Streep. The film is pretty accurate historically regarding Women’s Suffrage in the late 1800’s and early 1900’s England. From the Smithsonian Magazine web-page:

The filmmakers deliberately modeled [fictional character] Maud [Watts] on the stories of working class suffragettes, whose activism put their jobs, marriages and even custody of their children, at risk. “I think what was interesting for us was to create a rich ensemble of composite characters who we felt would carry the voices of these women who hadn’t been heard and allow them to segue and intersect with these extraordinary moments of history,” says Morgan. 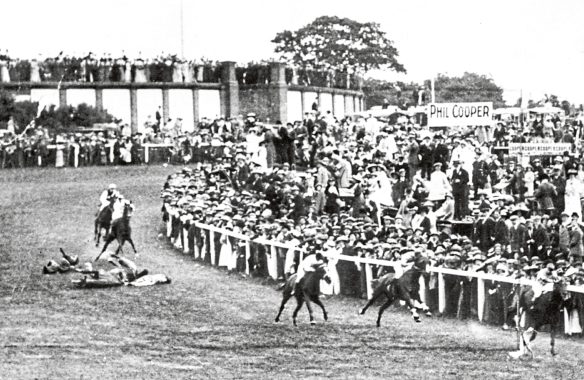 Many parts of the film were real historical events and characters.

…the bombing of Chancellor of the Exchequer, David Lloyd George’s empty country house, and Davison’s fatal protest at the Epsom Derby – were real. After decades of peaceful protest with no result, suffragettes, particularly those in Emmeline Pankhurst’s (Meryl Streep in a brief cameo) Women’s Social and Political Union (WSPU), followed the motto “Deeds Not Words.” Taking pains not to hurt people, they created mayhem by attacking property – including slashing a Velázquez in the National Gallery  – and disrupting government meetings.

Emily Davison’s protest, whether to attach a scarf of her Movement’s colors to King George V’s horse or to sacrifice herself by death or maiming is unknown to this day. What happened in decades and a century later was unprecedented.

Today, Davison’s gravesite in Morpeth, Northumberland, is a feminist shrine that attracts visitors from around the world. […]

“What is extraordinary about that footage is you can see that this wasn’t a small movement of ladies who meet for tea in Kensington,” says Suffragette’s screenwriter Abi Morgan.  “This was a national and international movement. 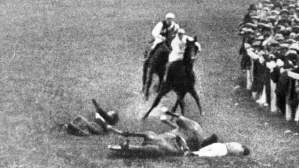 Emily Davison’s entire story is quite remarkable for the time-period. She like most women of the time had very few options outside of the home and birthing then raising children. As a well-educated woman she taught as a teacher and live-in governess as well as attaining two college degrees from the University of London.

Davison was tireless and ingenious. She was arrested nine times for offenses ranging from breaking windows at Parliament to firebombing letterboxes. One of her more creative stunts was sneaking into a closet in the House of Commons one night in 1911 so she could claim Parliament as her place of residence on the official census. It was a subversive double protest. In one act, she could – as many suffragettes were attempting – avoid being counted as a citizen by a government that didn’t recognize her right to vote while if she were counted, it would be at the address of the center of that same discriminatory body.

After her first arrest she wrote gleefully to a friend. “Did you read about it? We went outside Lloyd George’s Budget meeting at Limehouse, and protested at women being kept out, etc. I was busy haranguing the crowd when the police came up and arrested me.” She describes breaking windows in her jail cells and adds “What do you think of me?” before signing off “your loving and rebellious friend.”

If you’re interested in more heroic details of the Suffrage Movement—which later fueled our modern-day Women’s March and activism for more women’s social, workforce, and legal equalities—then click here for the Smithsonian’s article. It is well worth the time.

As I finished Suffragette, I then moved on to another well-directed, acclaimed cast and historically accurate feminine hero 2009 film called Agora starring Rachel Weisz. If you are unfamiliar with the great female philosopher, astronomer, and mathematician named Hypatia of Alexandria, Egypt, during the late 4th-century CE inside a Christianizing and increasingly patriarchal Roman Empire, then I suggest you study her and watch this outstanding film. Hypatia was perhaps one of the very earliest suffragette’s in human history.

Nevertheless, let’s never forget that extraordinary heroes come in all sizes, all races and ethnicities, and certainly all genders and sexual-orientations. They’re all human. That is no debate whatsoever.