Just over an hour ago I was given some very painful news from a friend. She and many/most of my good friends know all too well how passionate I become about iconic drummers, percussionists who make the skins (as they are sometimes called) come alive, the various metals, hollowed woods, mallets, and drumsticks hit, reach, vibrate into and through, then consume human bodies and spirits bringing together perfect, harmonized syncopation with Earth’s air, our ears, with life’s purest beat and rhythms. Today is a day and night of mourning. I am crushed as well as stunned by this news. The Rolling Stone headline reads:

When I heard the Canadian band the very first time in 1978, their “2112” album, I was immediately affected and in sheer awe at this drummer’s skill and abilities. I remember that day on the airline flight to London Heathrow with football/soccer teammates. He and I were both drummers in our middle school and high school marching and concert bands. After listening to Overture, The Temples of Syrinx, Discovery, and the remainder of the 20-minute concerto of fine rock, and then A Passage to Bangkok, I was speechless. I thought I had just listened to the most beautifully complex, other-worldly performance of percussion I had ever heard. And believe me, I had listened to countless rock drummers at that age. It was my obsession next to football/soccer.

To this day there are but two or three other performances by other drummers that by my heart and standards can be included in the discussion of Greatest of All Time. Neil Peart was more than my childhood idol behind the skins and cymbals. He was a god, the Lord of the Skins as we ‘sophisticated’ drummers affectionately called him. Now he has passed into the ages at far too early an age. This world, the art of fine modern music, percussion, rock, and lyrics will miss terribly this brilliant, talented man. A dark day indeed.

I raise my shot-glass to this icon of drums. I place a pair of drumsticks in front of a burning candle in honor to this once-in-a-lifetime artist that meant so, so very much to me most all of my life, not only by his remarkable sometimes independent syncopation by his two hands and two feet—he could keep four different rhythms perfectly and simultaneously—not an easy task for most, but Neil was also highly educated and therefore an exquisite lyricist for Rush. I’d like to pay my homage to this fantastic man and the trio from Toronto.

Many of you might be familiar with their 1981 hit Tom Sawyer from the Moving Pictures album, one of their top selling albums of all-time. Be utterly impressed by this man’s drumming talent and watch how he invests so much into his artform:

I have many favorite songs/lyrics that Neil composed. It’s impossible for me to say that I have a number one song/lyrics because I don’t; never could shrink that list to less than ten. However, for this emotional occasion I will share one of my top five. It is from their Permanent Waves album released in 1980. I wore this entire album out for at least two years straight. I played it so much on my stereo turntable it hardly left the actual record-table, much less get put away into the paper sleeve. The song I’ve chosen? Though Red Barchetta is a magnificent arrangement in all ways, I did not choose it. Part of my adoration for this particular song is its continual time-signature changes from 6/4, 7/4, to 6/4, to 7/4, 6/4, and 8/4 and back again. Simply amazing! Neil’s four limbs never miss a beat, that is… four independent beats. Here is Neil Peart’s work of art, Freewill: 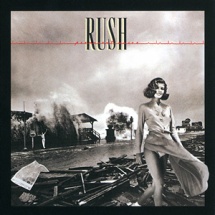 [incredible instrumental solos by Geddy and Alex, followed by the most hypnotic, moving seque back into the main theme] 😲

“Freewill” by Neil Peart and Rush from their album Permanent Waves

If you are interested in listening to this song’s complex sophistication of Neil’s syncopation talent along with bandmates Geddy Lee and Alex Lifeson, click here.

Finally, I give my most humble adoration, appreciation, and tribute to Neil for this long, very exhausting composition, also with several time-changes. It took me all summer long (in 1981 when I finally got my 15-piece monster drum kit!) to learn and master, mimicking every single hit of the open or closed hi-hat, double-bass strikes, cymbal crashes, and all drum-fills by every sized tom-toms from 4-inch to the 16-inch and 18-inch floor Toms in perfect syncopation! Never in my life, then or since (well, until my Alt-lifestyles actually), had I achieved the neurological, chemical rush in my body, the natural euphoric HIGH I would get every time I played this song. Dear God it nearly killed me. The composition was around 144-beats per minute for 9 ½ minutes non-stop! Very, very demanding mentally and physically on any drummer. Some olympic athletes might compare it to a Decathlon. But the more I perfected it, the more I HAD to have more! I was becoming a protégé of drumming greatness. Without a doubt I was a seriously lost Peart-addict. There was no hope for me.

I pumped it through my garage band’s Peavey guitar-speakers, four of them all at once! Our downstairs playroom walls with sliding glass door and one window vibrated like earthquakes when I turned up this jam. I had to install a small fan on top of one of my bass-drums to help with the perspiration I’d work up. Several times my hands were so sweaty I’d launch a drumstick across the room trying to keep up with Neil’s unhuman play. What a FREAKIN’ workout it was to get lost in this brilliant piece of music… and I loved every second of it. Perhaps you will hear and detect why it is incredibly demanding for the drummer:

I am going to miss this great artist and percussionist dearly. He fills so much of my early life, my addiction to many rhythms all coming together to create masterpieces. There have been several great drummers over the decades that compare to him, but they have or will confess soon enough that they should not really belong in the same hall or Apollonian Temple as Neil Peart. Here’s to you Neil, rest in peace. I wonder, will the concert halls and recording studios ever be so fortunate again to have a real historic Master of the Skins? Probably not. Not in my lifetime. Now I’m going to a private room to weep.

56 thoughts on “A Virtuoso of Rhythm Passes”