In life’s ambitions, treasure hunting is more common than you might think. It is just as popular today as it was centuries ago on the high seas, or the mountains of Shangri-La, or El Dorado on the banks of the Orinoco River. In fact, in some form or fashion and metaphor we all hunt for value, for meaning, the marrow for one or more “X Marks the Spots.” Every single human being has done this: seeking our fortunes, literally or supernaturally, or both. Whatever form this aspiration takes, it has certainly been human nature for over 300,000 years of evolution. Our desire to become less ignorant and/or less afraid through understanding. In so many ways our lives are stories, or as Shakespeare aptly described: “All the world’s a stage, And all the men and women merely players.” We strive, we perform to somehow be of worth to self and others, worthy of life as well as at death. We love and hunt for some type of an astonishing, ageless story. 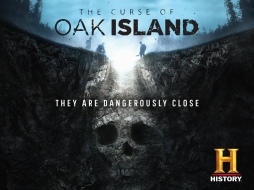 I stumbled across a business magazine article last week about a very well-known, fascinating trait we humans possess: worth-seeking. The article was What ‘The Curse Of Oak Island’ Teaches About Actually Finding Treasure. The article critiques the History Channel’s popular Tuesday night show. The article and hit TV show both reveal a lot about human nature and our obsession for extraordinary stories told in extraordinary ways, whether we are the audience or the actual treasure hunters. If anything, the two key components of a timeless “story” reveal our vulnerabilities and insatiable curiosities no matter what side of the story you are on.

Even if the Lagina-History Channel team already know the [final] answer, the ‘gold’ their mining from the franchise they’ve built around the whole undertaking promises to stretch out the timeline to when they decide to tell us. But as we wait for the imagined treasure, Rick [Lagina] has already given us the most valuable treasure of all: the reminder that there is no isolated ‘ah ha’ moment in which the value we seek just appears.

All human beings have this general trait to find the greatest payoff manifested during our lifetime in many different ways. To degrees we are all treasure hunters. However, history is replete with legends, stories, hoaxes, and myths of an ultimate, incomparable treasure yet to be realized. The hunt becomes bigger than the prize.

Most tangible, known hidden “treasures” have been found. But there are indeed hunts that lead either to an unexpected different treasure or a completely empty dead-end. Consequently, the latter can lead to more hunting, more conspiracy theories, or redefinition, retro-fitting, and modifications for the sake of hunting and hope which drives humans to no end, supernatural resolve or “faith,” and yet no tangible treasure!

You might assume otherwise, but Oak Island co-star Rick Lagina is just like the rest of us. As a treasure hunter and a cable show star, from the outside he may look different. But below the surface he’s surprisingly the same, something he proved last month in a season 7 episode of the show. In a crescendo moment of discovery for a show that already has 99 episodes in the books, Rick summed up the breakthrough saying this: “It was a truly aha! moment.” But it wasn’t.

I do recommend everyone read the entire Inc.com article by Larry Robertson. Why? Because it hints, perhaps demonstrates that if we are patient enough to allow this enormous Universe/Cosmos to reveal its answers. Allow its hints and clues of why and how it functions and at what speeds, sometimes beyond our measly, instant (impulsive?) attempts to understanding it all. Patiently allow the macro-Universe and subatomic/Quantum Physics, laws, and “spooky action at a distance” to reward our impartial, patient, persistent curiosity and scrutiny so we can indeed realize over time—not always in our own lifetime or within our grandchildren’s lifetime—but with cumulative, scholarly consensus this mindset generates higher accuracy and detail of those hows and whys.

When we cannot know or explain with any certainty or high plausibility, there is no loss, no embarrassment to tell others:  “That is inconclusive. We need more time to determine for sure.” Or to say confidently “After 1,900 years and especially the last century and more so the last two decades, what was once believed and commonly, socially accepted as infallibly true, is in fact NOT true at all.” But how many are brave and willing to be undecided, unswayed by the norm, the vast majority, or even stand firmly against the falsely, ill-founded traditions and conventions of the crowd, of the antiquated systems of This is how it is, how it has always been for 2,000 years!?

Allow me to draw comparisons to the human experience and the sheer lure and power of perpetual hope, commitment, and undying faith for an ultimate, undetermined, possible winning lotto-ticket IF you keep playing every day, every week for the remainder of your life. You can’t win the jackpot, however, if you don’t play and ask too many critical questions while playing. It begs the question, What makes people, a person, to wish upon hope even in the face of no proof, no guarantee of success and reward at the end, for the rest of their life?

The undeniable fascination with the intertwining of historical theories and possible treasure is what drives each season of The Curse of Oak Island. Because the speculation excites and entices, it’s likely that the show will not only see a Season 8, but a Season 9, and more.
— Aiden Mason, “Why the Curse of Oak Island Will Live to See a Season 8,” TV over Mind.com, accessed Jan. 24, 2020

Like Speculators of America’s early 19th century westward expansion and economic development, and those today in the stock market and banking investments, analyzing and forecasting future prices and ROI’s, the Laginas brothers and their team must find and contract with investors to hedge risks and losses, not to mention their public image and reputations. This is smart business, right? Funds have to be raised in order to keep the treasure hunt alive! From the Showbiz Cheatsheet website:

Before the TV show became #1 in cable TV-ratings with over 3.34 million viewers, Marty Lagina was already a very successful, wealthy energy mogul through the sale of his natural gas drilling company Terra Energy. That sale enabled the start of his two current companies Heritage Sustainable Energy (wind turbines) and his winery Mari Vineyards, both in Michigan. With his accumulation of capital, business experience, and past drilling experience Marty Lagina and his financial-business partner Craig Tester, along with other business-team partners, Oak Island Tours, Inc. was founded.

Does this legendary story remind you of any other riveting, extraordinary “stories” in history of immense value and wealth waiting to be discovered and owned? Do all hidden treasures, found or not, have to be strictly monetary in value? No. When they are never found they take on an almost Gnostic, metaphysical meaning, perhaps to save face. Consider these few popular tales still alive today:

Notice the consistent patterns? That is, the consistent human psychological patterns of Gold Fever or addictive greed or more precisely the constant need for external affirmation for one’s self-worth:  polydependency versus codependency. Why are individuals, or groups, organizations willing to put everything on the line, change their entire lifestyle, risk even their own life for some cause, for a legend or unconfirmed story that has no guarantees of a payoff, much less that exists or has only half-truths… or worse? Why have over 3.34 million TV viewers become obsessed fans of the History Channel show The Curse of Oak Island for seven or eight years? Why is it that an unconfirmed existence of some future jackpot, treasure or worth can perpetuate 7-years, or 20, 100 or even 2,000 years of unyielding, unwavering belief by millions of followers?

And if you really do feel/think the hidden treasure you seek probably, maybe exists, a better question would be:  How could one raise the probabilities of verifying its existence then raise your chances of finding and claiming it?

Yet, millions upon millions of people go on blind treasure hunts daily, weekly, or over their lifetime with no such credible forensic or plausible confirmations and evidence that the “story” is factual or mythical. Why? Why would they make such life-changing decisions and take such drastic measures for something that isn’t there? Could they be suffering from psychological polydependency? Is it the gnawing need for pure wealth, or multiple affirmations and heightened self-worth by others? Feel free to share your thoughts below.

14 thoughts on “Treasure Hunting & Worth”