Albert Einstein tried to join the fundamental forces of nature to the accepted laws of elemental particles under one simplified framework called the Unified Field.  Between the 1940’s and the 1970’s several scientific fields were successfully joined into one single model:  James Maxwell’s electromagnetism was translated into mathematical terms called quantum mechanics; Niels Bohr and Richard Feynman, along with Einstein consolidated the behavior of matter and energy on molecular, atomic and sub-atomic levels into Quantum Physics.  It was an age of great scientific discovery and newer challenges, primarily how to incorporate gravity into Quantum Mechanics and Physics.

Generational macro-to-micro perspective of a quark — click on the diagram for a grade school level explanation.

Experiments in particle acceleration, i.e. breaking down atoms into smaller sub-atomic particles by literally crashing them together, revealed seemingly more unqualifyable mechanics.  Yet after decades of watching these experiments, physicists began seeing patterns or family groups of sub-atomic particles.  In our science classes we learned that elements were made up of various atomic combinations.  Within the individual atoms we learned they in turn were made up of protons, neutrons, and electrons.  By 1968 physicists discovered yet another generation of particles: the Quarks.  These sub-parts of protons and neutrons, six types  exactly, exist within the nuclei of atoms.  Therefore, with the spinning electrons, neutrinos (created via radioactivity), the six different quarks, and photons (the basic unit of light), scientists and physicists have found a “new” 4-Part Standard Model joining quantum mechanics, quantum physics, and yes, gravity.  Mr. Einstein would be at the edge of his seat, right?  Has the Unified Field finally moved from theory to Universal law?  Not so fast.

For the last half century our most powerful sub-atomic microscopes and particle accelerators found the quarks.  Now the questions are what hold these four basic components together?  How are things solid or grouped together?  What intelligence is behind the behavior of everything inside us, everything on our planet, our moon, our solar system and everything between and beyond?  Well, modern physicists are pretty sure it’s a unique energy organizer.  What can’t be explained yet is why there are vast weight-ranges, or mass from these seemingly infinite random forms of energy or intelligent interaction when protons and neutrons smash together.

Enter the Higgs Phenomena (Peter Higgs).  Higgs postulates that there is a sub/sub-atomic field throughout everything and touching everything.  When certain particles interact with this field, that interaction determines the mass of those particles, like our own bodies or other objects of form.  More specifically, Higgs predicts that a matching particle will produce a constant-connector or force carrier (like light given off from photons), termed the Higgs Boson.   Physicists think this Higgs Boson will be discovered and measured in a larger particle accelerator than previously constructed at Fermilab near Chicago, IL; which is 3.9 miles in circumference and capable of pushing particles of protons near the speed of light.  But their accelerator is neither long enough nor powerful enough to crack-open the Universe’s last common denominator.

Near Geneva, Switzerland the European Organization for Nuclear Research (known as CERN) has built just such a mega-mammoth. The Large Hadron Collider is 17 miles in circumference and in 2009 and 2010 accelerated protons almost four times faster than Fermilab, but is designed to smash particles over 7-times faster or with 7-trillion electron volts.  However, due to the enormous amounts of artificial energy required to push particles upwards to the speed of light and greater distances, the CERN’S LHC will not be ready for full-power colliding until 2014. 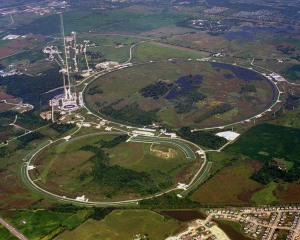 Detailed explanation of these future experiments and the plethora of scientific terms, theoretical experiments, laws, and their formulas goes beyond the scope of this already bloating two-part article.  However, if you get a wild hair to exercise your brain and expand your knowledge in quantum physics, I urge you to do so, beginning with a few of these mentioned theories and scientists.  But physicists now know that we must move beyond classical Empedoclesian and Newtonian laws of nature which have governed our understanding of matter, gravity, time and space for 2 or 3,000 centuries.  At the scale of the Unified Field (or Higgs Boson) there is no other choice but to go outside classical intuitions.

Here is where things get abstractly bizarre, at least for me.  Conceptually or theoretically this is where scientists are at today:  macroscopic bodies/entities are in multiple positions simultaneously (around thousands or more) on the nuclear scale of the Unified Field called Quantum Superposition.  They may also be connected over unbelievable distances called Entanglement.  And more intriguingly, they can be congealed into one quantum state (e.g. our own bodies) governed by one wave function called, interestingly enough:  Bose-Einstein Condensates, slightly touched on in Part 1 of this article with Dr. Emoto’s findings via waveforms.

The 17-mile CERN Particle Accelerator near Geneva, Switzerland. The synchrotron sits 574 ft beneath the surface.

Due to the depth of this subject and need to do it justice while not sacrificing meaning, I will continue this pseudo-brief topic in the third article:  Connectivity – Back to Physics Class.