Quite a news headline don’t you think?  But it isn’t that far off.  Just as modern nuclear physics and quantum mechanics have shown that everything in existence on our planet is connected, including humans, years of DNA sampling and genetic research from around the globe increasingly shows that all of us are from the same family and same place.  Indeed, socially and culturally mankind is very different all over the world.  Yet much of our presumed diversity turns out to be only “skin deep.”

The field of genetics and in particular human genetics is the study and research of inherited traits from paternal and maternal ancestors.  Traits such as physical appearance are part of every human’s genetic code and are easily identifiable.  However, other traits such as blood type or immunities are not so easily identified by the naked eye but can be through DNA, or genetic coding.  The order of these genetic units gives a living organism, in this case a human fetus, instructions about how to be built and how to eventually operate.  During the lives of a father and mother these units can evolve into mutations, or different instructions based on environmental factors such as diet and climate, as well as by external factors such as the spouse or partner and their internal and external factors during development.  Over many generations these mutations become subtle or dramatic based on the ancestral story.  For a more in-depth description of human genetics click here.

Primary migrations of the human race

In 2005 the National Geographic Society, IBM, and the Waitt Family Foundation, and a panel of genetic scientists led by Dr. Spencer Wells, began a monumental anthropological tracking of human migration patterns using DNA samples from over a half-million people (and rising) from over 140 countries around the world.  What the project has revealed is nothing less than remarkable.

So far – and I emphasize “so far” – continued advances in DNA science and technology have shown geneticists that all mankind have evolved from mothers and fathers from southern Africa about 200,000 years ago.  Then 154,000 to 134,000 years ago some began to migrate northward.  This introductory map has been constructed over the last decade by geneticists Dr. Douglas C. Wallace of Yale and Cornell Universities, Dr. Peter A. Underhill and Dr. Peter J. Oefner both of Stanford University, and now continued by Dr. Spencer Wells and The Genographic Project.

Dr. Wells approaches the movement of mankind not from our distant ape/monkey ancestors of billions of years back as Charles Darwin attempted, but instead from a genealogical approach.  Most of us can trace our ancestors back three, four, perhaps five generations back.  However, beyond this point it becomes increasingly harder to find details about our ancestors; where they lived or moved, or how they lived.  This brick wall is sometimes called the fog of history by genealogists when family specifics become sketchy and grey.  Many times this is the result of catastrophic events where the record is lost or destroyed, or perhaps when wars and invasions wiped-out the population and the victors wrote their own ‘version of history.’  For example, my own particular family history – primarily my maternal history – at this point can only be traced back to the late 1700’s.  We are unable to find more ancestral details due to harsh religious persecutions in central Europe at that time from which my maternal family were imprisoned or killed.  Nonetheless, this isn’t a far rewind on the ancestral clock compared to what Dr. Wells and The Genographic Project have achieved. 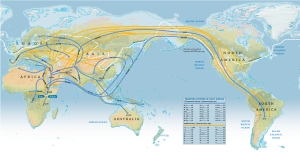 Migrations after 7 years of DNA collections

Today the ancestral records can be tracked further back…much further back; like 40,000 years back.  And due to the continuing advances in DNA research, we may soon discover much more than basic demographics of where we came from and who we belonged to.  You may ask “how is that possible?”  The answer is that our DNA code is a very, very long blueprint of molecular signatures; over 6-billion signatures going back to your…our earliest ancestors.  Any moment when a signature changes and is passed on to a descendent this is called a genetic marker.  It is from these genetic markers that geneticists like Dr. Wells have been able to trace backwards all of mankind’s migrations everywhere in the world AND where our earliest mothers and fathers originated.  The above news headline would then read:  We Are All Africanus-Humans!  Imagine how popular or unpopular that news would be.

Before too many jump up and down hysterically that these genetic-DNA advances show scientific support for what the Holy Bible or other holy religious scriptures have taught for millennia, it must be clarified that the original mother and father discussed in this project were among a group of some 2,000 humans hunting and gathering together for survival.  Those 2,000 were descendants of even earlier Homo erectus mammals.  For the sake of simplicity for the masses, these geneticists have colloquially named the first known mother “mitochondrial Eve” and the first known father “Y chromosome Adam,” both from the 2,000 in southern Africa.  These two parents should not be confused with the biblical Adam and Eve in the Garden of Eden – that would be a premature jump of some length.  Keep in mind that when Homo erectus on through Homo sapiens began communicating to each other verbally and with cave art, it would be another 14,000 years before writing systems took place such as chiseled tokens, sequenced pictographs, and scripted cuneiform.  The Semitic alphabet (earliest forms of Hebrew) did not become widely used for another 1,400 years approximate.  Therefore, to force the religious testimonies into context with the current genetic evidence, the scriptural stories are based long after the original 2,000 Y-Adams and m-Eves, and hence tell a story of only one leg (if taken literally) of many migratory legs coming from Africa some 16,000 years and 640 or more generations later!  That is an unimaginable and incomprehensible amount of events and variables well beyond prehistoric human memory and perception of the time.  Therefore, to say the biblical story of Eden is from a very narrow genealogical lens would be a gross understatement.  It is enormously unrealistic.  It simply cannot be the one and only historical source.

Back to The Genographic Project

Like it or not as it turns out, we are all from an African family.  “Within the last 200,000 years” explains Dr. Wells, “we all share a common ancestor; a mitochondrial Eve, a single African woman.  What’s more amazing is…the Y-chromosome Adam only lived around 60,000 years ago.”  What is inferred from this genetic discovery is that up until 60,000 years ago all of mankind resided on the African continent.  It wasn’t until after this time that a subgroup migrated outside the continent.  Why did this subgroup decide to leave then?  Why didn’t they leave sooner?

The continent of Africa has always been the most tropical continent on the planet over the past 200,000 years.  Above the Tropic of Cancer and below the Tropic of Capricorn most landmasses are cooler-to-frigid climates depending on the historical time period discussed.  The bulk of the other six continents do not reside inside the warmer more moderate climates of the two Tropics.  About 80 percent of Africa lies within the two Tropics making it the most ideal landmass to live during an Ice Age or glaciation.  The last hard glaciation started ending about 70,000 years ago (see graph below).  By 50,000 years ago the polar ice-sheets were a little larger than they are today.  When the warming began, Africa began to dry out and the food sources diminished.  Consequently, this is the time when groups began migrating north following their food sources onto other continents.  This is the time when mankind’s physical, cultural, and linguistic diversities began.

It is at this point when Dr. Wells and The Genographic Project began the journey of tracing the origins and migrations of some 560,000 individual DNA samples from around the world.  The project consists of three core components:

What makes this project so profoundly revolutionary are the ancestral results for all of us.  It will show your incredible family lineage and show it within the context of mankind, something never imagined or done on such a personal basis.  This project connects you not only to your particular ancestral makeup, but all humans to our singular African community 200,000 years ago.  This has to be one of the greatest evolving stories ever told.  How many questions about the origins of you and mankind will be answered?  Other questions the Genographic website asks:

“How many migrations out of Africa were there?  What role did the Silk Road, with its caravans and bazaars, play in dispersing genetic lineages across Eurasia?  What can our genes tell us about the origins of languages?  How did the great empires of history leave their genetic marks on our DNA?  And if we all share such a recent common ancestry, why do we all look so different?”

The last question above is one I find most intriguing as well as enlightening.  As mentioned earlier, climate has played a significant part in shaping our physical bodies.  With varying climates, some extreme, come varying food sources and subsequent diets.  During abundant food sources or during scarce food sources, how the group manages the sources will decide their survival.  And this determination, the question of how a group will survive is a question being answered on all genetic levels.  Whether it is familial, local, continental, or as a global species, the question today is always the same on every level:  how will we survive together?  With this in mind, the operative word in that last question above is “look”.  With the advances in genetic science and the continuing work of The Genographic Project, we have learned that on a genetic level every single human being on this planet is 99% alike.  It is only the 1 percent outer differences, our “looks”, our adaptive evolving physical features of survival that are different. 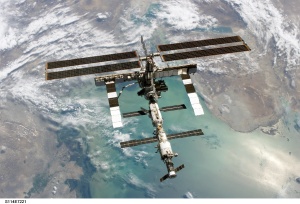 Earth seen from the ISS and human space-travelers

While orbiting the Earth inside the International Space Station 250 miles up, Russian cosmonaut Sergei Krikalev said while looking down at our home planet, “from space you do not see any borders… you feel yourself part of humankind, not just man from one country or one city.”  Krikalev could not be more accurate.  As if from a height of incredible omniscience, Sergei points out that Earth is not a child’s sandbox to be selfishly divided and toys hoarded by the biggest bullies.  On the genetic level of inner space to the orbit of outer space, mankind is really the same.  What we are capable of accomplishing in collaboration with each other is now demonstrated from the molecular to the cosmos without interruption thanks in part to The Genographic Project.  I recommend everyone join, after all, we are from the same miraculous yet harsh place moving on the same journeys.

The adage “hope for the best, but prepare for the worst” comes to mind.  As Earth’s paleolithic record shows, our planet can be abundantly sustaining as it can be horribly unforgiving.  As the most dominant intelligent species, together we can learn, respect, and grow from it, or we can fight against her and our cousins and perish.  It is a simple choice with a simple answer when all the understood parts, from top to bottom, left to right, atomic to macrocosmic point to the same overture:

Our genetic blueprints and Sergei Krikalev’s recognition from space agree, we are all simply humans from the same Earth-family; nothing more, nothing less…yet a little more and a little less.

4 thoughts on “Our Family Reunion”