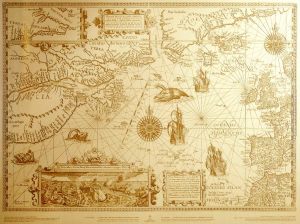 Remember the old patina-ridden maps of the world from the Age of Exploration where the outer-limits of the seas had sailor-eating dragons?  As a boy I was fascinated with their ferociousness and perplexed by their purpose.  What did those evil serpents really look like if they devoured all hands on deck?  Where are the few survivors?  I demand to interview them if they haven’t already gone mad in some insane asylum!  Imagine the fear they must have endured.  My imagination forced me to squeeze my thighs together so I wouldn’t piss my pants picturing their last minutes of life!  What unbelievable courage those explorers must have had…or stupidity.

Many decades later, journeys accumulated, and through my graduated intelligence I deduced that those poor victims of dragon-breath were now simply bones and dust – or fossilized dragon feces.  A couple of light-bulbs above the head and years later, those maps gained new meaning.

I have traveled to and experienced many cultures on four different continents.  I have been to places where the meaning of life resembles nothing like what surrounded me growing up.  The many nuances of their daily lives are as familiar to me today as they were then and I thank the gods of seafaring and wing-tips I am alive and changed.  But I have missed something.  Something was not on the map.

I think the title I am searching for is neo-cartographer.  I have explored many places on this planet.  My Captain’s Log would record not only the longitude latitude bearings, but also something significant to read about the people and their magnificent homes.  Still…something was missing.  I am a stickler for detail.  Were my maps incomplete?  Were they out dated?  What?

It was right under my nose.  No, that is completely wrong!  A great cartographer would slap me across my short-sighted face for saying that!  Remarkably, my incomplete map with unimaginable treasures and deadly creatures had never really been so unreachable.  Mad at myself I asked, How could you be so blind?

My beautifully created maps were missing dragons.  Everywhere I had gone and everywhere I had detailed were missing the man-eating dragons!  It seemed the further I would travel, fewer dragons existed.  But I have yet to reach three more continents.  What if I went to the continent of Asia?  Would I find the dragons there?  Yes, but I’ve been told they are woven into their fine silk.  What if I went to Australia?  Would I find them there?  As it turns out, I’ve been told they have kangaroos and koala bears.  Antarctica?  Nope: penguins.

This enlightenment begs the question:  Where are the homicide-crazed dragons?

I have a distinct class of maps stored in a cabinet labeled “Domestic”.  Excited I rummage through these stacks of maps; between 50 and 60 small, two large, and two of them as big as a 12-place dinner table.  On these maps are the faces and memories of all the women I have intimately shared myself and loved.  I rediscover some most profound joy and passion, and some hurt and disappointment.

The small maps dominate the shelves.  No matter how well I tried to rig the outgoing vessel, no “crew” or co-captain would sign on.  The maps are black and white, and very much incomplete.  The two large maps have more detail, more emotions, and an array of colors, both with two distinct gold-bands tossed overboard in stormy seas.  One map has a newborn boy I thought to become my first-mate, but as the tale goes he belonged to another fleet of sorts.  The other vivid map has even more detail, more colors, deeper emotions, and more stormy seas.  Yet this particular map, unlike the previous, has more navigational points necessary to make future explorations less hazardous.  Mmm, frame this one.  My two beautiful children are on it.

But as I examined the two massive maps, I realized I was not going to find any flesh-eating dragons I had been so anxiously seeking.  I am hunting in the wrong place.  I rolled the maps back up.  My search for the beasts was over.  Gone were my adolescent fears.  Peacefully and with gratitude I returned every single map into my Domestic armoire.  Close doors, leave key, do not lock.

I have charted many rough, calm, beautiful, gloomy seas, and met a wide scope of explorers and settlers.  Since 1989 I have been in the alternative lifestyles and with them come all types of explorers from all walks of life and orientations.  Before ‘89, I was ten years in the vanilla or monogamous lifestyle with a later short, disastrous 4-year return to vanilla-monogamy in marriage then divorce with kids.  I was raised and taught my first 26 years under the venerable roof of monogamy by my biological parents.  Dignity, honor, and loyalty were three mainstays in my home.  However, for the last 13 years I have not lived an ordinary life; everything but.  Why? 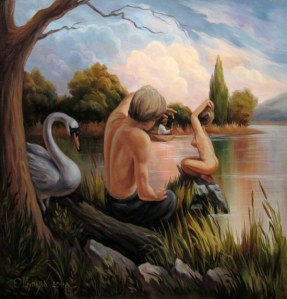 One perspective from only the shore

Ralph Waldo Emerson once said “Don’t be too timid and squeamish about your actions.  All life is an experiment.  The more experiments you make the better.”  Emerson and I would have been shipmates.  Emerson had no fear of dragons because they exist in only one place:  in our minds.  They are creatures who feast on human will-power.  They survive and flourish only when we accept their flames of “It cannot be done…it is not so.”

This is never more present than in our intimate romantic relationships.  Fear of self-examination and fear of discovering our flaws, as well as our brilliance, disempower our ability to love more, love deeper, and more importantly to love several soul mates throughout life.  Those disempowering dragons exist there, not on maps or out in the world.

The irony of my personal tale is this:  in my quest to discover all things living around me and beyond, feeding my near insatiable curiosity, once on-guard to those damn elusive dragons…I have produced a worldly Captain, a rather large cartographical library, and an exceptionally fine-tuned HDD – Human Dragon-Detector – that can wale the warning…

“Here Be the Dragons!”

There have been two or three horrific dragons that I have fought in my lifetime.  Some of them I created, others sent to me.  The most painful dragon was also the one that had an evil twin with my name on it.  For whatever reason the dragon-of-infidelity menaced me for twenty-two exhausting years, begun by my father’s suicide; another “map” I will share in a later post.

Is there anyone out there, male or female, that knows of what dragons I speak?  How far have you traveled inward as well as outward?  Where did you find the dragons?  Are they vanquished?

2 thoughts on “Here Be Dragons”