It might be a tiny consolation to intelligent college-degreed Americans that tRump did not win decisively the U.S. popular vote Nov. 8th. As of 12:45pm CST today it was 48% to 48%. But that will not change what has begun happening for the next 4-years.

Let me first preface my initial thoughts. I am a political Independent who thoroughly evaluates ALL candidates and their background, experience, and track-record. I pay no attention to public campaigns and even less attention to the media-TV propaganda circus. Using websites like ProCon.org and other non-profit 501(c)(3) nonprofit nonpartisan public charities that provide well-sourced pro, con, and related research enabling what I think are very well-informed decisions. That said…

If you thought Hillary Clinton’s blunders in Washington D.C. were indications of serious character flaws for the Oval Office or how well or poorly to handle affairs in our nation’s capitol, on Capitol Hill, and out in the daunting international arena… we have just elected an immature 70-year old racist-misogynist with 1) a less-than-poised-mouth President, 2) with absolutely NO GOVERNING EXPERIENCE WHATSOEVER running the affairs of one of the world’s biggest, most influential nations in 3) extremely diverse global affairs with 4) a Congress that Constitutionally controls one-third of the total power between the three branches — 5) which is an entirely DIFFERENT beast than the private sector — of which 6) this man also has ZERO EXPERIENCE doing, ever!!! Now riddle me that!?

At least our Constitutional checks and balances are one more consolation for me and most definitely for our foreign allied nations and neutrals that are in as much dumb-founded shock as I am. 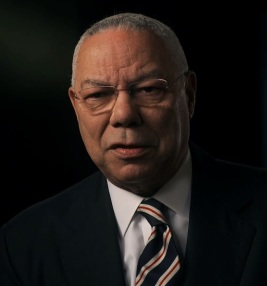 I like to consider myself a calm, reasonable man with above-average capability for critical-thinking skills, appropriate de-escalation methods — from my years in the Psych/A&D and Crisis treatment field — college-degreed with additional 18-hours graduate studies, and a deep passionate fondness for history and social sciences resulting in 5-years of general and Special Ed public teaching. This is why I have a high respect and admiration for retired 4-star general and former Secretary of State Colin Powell. He is the consummate embodiment of stoic diplomacy coupled with first-hand experience in war and world conflict. What I admire most about the esteemed Colin Powell is how he conducted himself during America’s most polarized tumultuous times:  Vietnam, the invasion of Kuwait & subsequent First Iraqi War, and 9/11. If those three “tests” were any indication and model of how to manage diplomacy, politicians, and the dynamics of crisis, then Powell passes with stellar excellence! Magna Cum Laude, if you will. Two of many of my favorite Colin Powell quotes…

What is further mind-boggling to me is that Colin Powell, though technically a Moderate, aligned himself politically with the Republican party — why was the G.O.P. unable to find anyone in 2014-16 resembling or somewhat-resembling the experience and exemplary poise of Powell(?), even someone with just HALF of his Capitol Hill savvy anywhere in this nation of 325-million!? Here is a very good Sept. 2016 New York Times article by Michael Shear about what Powell thinks of our two main Presidential candidates (Click here). I think Powell is spot on, knows what he is saying, and has the experience to back it up. Period.

Finally, what I will never be able to wrap my head around is how an American “democracy” gave tRump enough support (only 48%) to cause our Electoral College to actually put this no-experience-whatsoever man into the White House. Maybe this short video will help explain to the rest of the world how this happened. Click the link below…

Or maybe that doesn’t help at all and only confuses our allies and neutrals.

I do know this for those of you in foreign countries, those delegates in the Electoral College are our previously elected House Representatives and Senators from our 50 states, who are representative of our state’s two bipartisan parties and lesser extent third parties. But these “delegates” don’t get into office without being first elected by registered voters in their respective state. In other words, some/much of what happens or doesn’t happen on the Federal level hinges on what informed, or less-informed, or ignorant registered voters do and don’t do (i.e. active, inactive, or unregistered voters) on the municipal, county, district or precinct, and state levels FIRST!

Ultimately, there are only six groups to praise or blame for the U.S.A.’s political Electoral College success or failure (e.g. Abraham Lincoln and Richard Nixon, respectively):

Naturally, the origins and causes of the above six American groups are an entirely different discussion and personal blog-post for which I currently have no desire nor energy to write. But hey, we all now have 4-years to think about and deal with it. This is the bed we’ve made for ourselves, now we must sleep in it.  — says with sad dejection —

48 thoughts on “Some Chicken Soup”