To review, in Part I of this series I introduced epilepsy, Simple Focal Seizure and temporal lobe epilepsy (TLE) specifically, some accounts of this disease/disorder both in ancient and modern history, and some broader context for Saul’s (Paul the Apostle) drastic 180° turnaround toward Jesus’ The Way sect or disciples/students in and around 1st-century CE Syro-Palestine while on his way to Damascus. The Christian Bible(s) are full of various accounts of epileptic “visions” or revelations in both Old and New Testaments, e.g. 2 Kings 3:11-15 to name one. But the passage most glaring and most telling for Saul’s hopeless, embarrassing ailment of TLE are the above verses in his second letter to the Corinthians. With these verses I wish to further substantiate Saul’s condition as temporal lobe epilepsy, or form(s) of it as the ailment varies case to case, yet still within the taxonomy of epilepsy.

As I briefly mentioned to Infidel753 in my comments of Part I, there were practices by Bronze Age Jewish Mystics (later Kabbalah) using two techniques:  Merkavah (moderate, safe) and Heikhalat (intensive, more dangerous). During Second Temple Judaism, particularly the Pharisaic sects and their sub-sects, Merkavah mysticism was mainstream because of the high-risks of extreme ecstasy or depressive paranoia of Heikhalat followed by being generally labeled a heretic and/or possessed by demons by colleagues and the public. There was a lot less control over Heikhalat types of visions or revelations, naturally too in the cases of “fall down” epileptic seizures. One of the “visions” or non-bodily states Heikhalat mystics would try to achieve and experience by chanting, reciting divine names, and with magical hymns was ‘ascending to a system of heavens or paradise (ecstasy) and antechambers surrounding the divine.’ This is in all likelihood what Saul/Paul refers to in verses 2 and 4 above “caught up to the third heaven” and “caught up into Paradise” inside his dramatic and unconventional visions/seizures. It’s perfectly reasonable to say that Saul, having suffered his epilepsy for much of his life, most likely including in Tarsus and Jerusalem during his educational youth, would have felt much more “accepted” in Heikhalat Jewish mysticism and of the school of Bet Shammai, as opposed to Bet Hillel or the moderates and Merkavah mystics.

It deserves noting too that Merkavah mysticism along with Hillelite ideology aligns almost perfectly with Hellenism and Neoplatonism. This gives good reason for later 3rd – 4th-century Hellenistic Patristic authorities supervising the composition of the New Testament canon to retrograde (change) or retrofit Saul’s education to Hillel, Gamaliel, and Pharisaic references in Acts, 2 Timothy and Philippians — more recognizable by Hellenistic Gentiles (perhaps rural, average Jews too) — rather than to his less auspicious, more volatile background, seizures, and short-temper of Shammai-Heikhalat teaching, behaviors and praxis inferred in Galatians and Philippians. With the latter, people in Cilicia, Syro-Palestine, Judah, and Galilee would’ve literally spat upon Saul as a perceived demonic, shameful spectacle; something Saul alludes to often in his letters.

Furthermore, and to conclude the topic of Saul’s epilepsy (TLE), increasing studies and breakthroughs over the last four centuries into the recognition of, causes, education of, and the treatment management of TLE, have led medical neurologists, psychiatrist, and clinical pathologists as well as related researchers to compile a rich neurobiological encyclopedia of epilepsy and the Sacred Disease. Two are of particular importance with regard to Saul and other famous and infamous historical figures:  St. Paul and temporal lobe epilepsy by D. Landsborough, and Epilepsy and Mysticism by Dr. Javier Alvarez-Rodriguez. I recommend at least browsing over these two very informative medical journal articles to see why it is very plausible, if not near certain, that Saul/Paul, the founder of Christianity, was an epileptic pseudo-Jewish mystic with frequent seizures.

Before any viable discussion can be made about Saul/Paul in correlation to Jesus, or as I sometimes refer to him the quasi-Sectarian Jesus/Yeshua, the discussion has to begin under a cloud of complex, convoluted, and sometimes suspicious literary sources from a very tumultuous, violent, and politically militarily volatile period in late-Republic and Principate-Imperial Rome. This goes equally for the Christian — including the Christian clergy and apologists — and the non-Christian or Secularist. This is not to say that plausible even highly certain conclusions cannot be made, but it is to say that an equitable playing field with equitable rules and protocols should and must exist for all parties and positions. Who wants to start a game where opponents or an opponent begins with multiple points, scores, or goals before one even gets onto the field, right?

One of the immediate problems modern New Testament readers face are that the books or the Gospels, Acts, Epistles, and Revelation are not in chronological order. To make matters worse, the time-gaps in between the books, events and person(s) they narrate are as long as a decade, half, a full-century, or more than a century in elapsed time. This speaks volumes, or to some degree, as to why the Hellenistic Church Fathers would choose to order them (27 manuscripts/traditions out of some 45-50+ available) instead of a simple linear timeline reflecting a more objectively honest cause-and-effect, start, middle, and end.  An astute and attentive NT reader/researcher would soon learn that one reason the Gospels are in the front/beginning (of many reasons) is because they originate exclusively by oral-sayings passed around in Sectarian homes and Jewish Synagogues with few actual c. 35-65 CE papyri manuscripts similar to Q-source. Below is a side-by-side comparison of the Greek-Patristic (Hellenic) canonical NT order and the best chronological order of it by general consensus…

Here’s the bigger question or concern, it is estimated that Jesus was executed about 30-33 CE. The very first Gospel of Mark was composed c. 70 CE, about 40-years after Jesus’ execution. There are somewhere between 10-40 years between Mark’s Gospel and Luke’s, around 5 for Matthew’s and Luke’s, and 5-15 between John’s and Matthew’s. All of Saul’s Epistles come well before any of the Gospels and Saul doesn’t concern himself in the least with anything about Jesus’ incarnate birth, teachings, supernatural healings, or trial and execution except the “resurrection” of Christ, strictly his Christ in his epileptic visions. Apparently to Saul/Paul nothing matters in c. 36-48 CE about God’s Sacrificial Lamb for the entire world except the meaning of the/his “resurrection.” Why 40-60 years later are Jesus’ Gospels, teachings suddenly critical to record? Most historical-biblical scholars reason that it was because of many questions and challenges over the decades to the validity of a Messianic anointing and the actual nature and purpose of Jesus the Galilean. What was it and what were they exactly that should make this Galilean stand out? There was no unanimous agreement. In fact, very little for at least 300-years. I repeat:  THREE HUNDRED YEARS.

Yet, there is still another monumental concern/question. The oldest copy of the Gospel of Mark, or the earliest narrative of Jesus’ execution and burial, has nothing about a later “resurrection” and appearances. The Codex Vaticanus, Mark’s Gospel, stops at 16:8, Jesus’ burial and empty tomb. Was it the correct tomb? Verses 9—20 were later additions to later copies of Mark’s Gospels, some short, some long. In fact, certainty of any “resurrection” cannot be obtained from the Gospel of Mark. This is not debatable.

These two strange, troublesome anomalies regarding the shuffling of books and the reliability of the Gospel narratives must be kept in mind when reading their “traditional” words and teachings of Jesus the Galilean. These NT and Gospel conundrums make finding what Jesus actually said and taught, and their intentions, difficult at best. Therefore, it is quite judicious that you the reader clearly distinguish a Gospel-Jesus versus a Jewish-Jesus. Dr. Lawrence Schiffman explains the necessity of the distinction with my own inserts [ ] and emphasis for clarification:

Early Christianity seems to have combined the apocalyptic view of the sects with a heavy emphasis on the Davidic [Hellenic] Messiah, apparently the hallmark of the Pharisaic [Jewish] approach. From this combination emerged a concept that the Messianic era was in fact at hand as Jesus was [re]identified as the Davidic [Hellenic] Messiah. When his mission failed to bring about the expected results foretold in the Hebrew prophets, nascent [Hellenic] Christianity revised those prophecies through the medium of exegesis and so was able to preserve the concept of the [Jewish] Messiahship of Jesus despite the disappointment.

That is a good general description capturing the context of the Hellenic Gospel-Jesus. Schiffman goes on:

Dr. Schiffman guides us into a deeper contextual understanding of the motives or intentions behind the Patristic shuffling of the canonical Hellenic New Testament despite the fact that Saul/Paul was spreading an implicitly and sometimes explicitly interpolation, or spin if you will, independent of Jewish-Jesus’ life and death. One further note deserves mentioning. It is my personal opinion and conclusion that the primary cause of the earliest divisions, ambiguity, fallacies, and confusion of the Christian Church and its Apostolic Fathers at 7-21 different Ecumenical Councils over some 400-years can be linked directly to Saul the Apostate. For further consideration of this problematic ambiguity first, below are popular manuscripts not included in today’s NT: 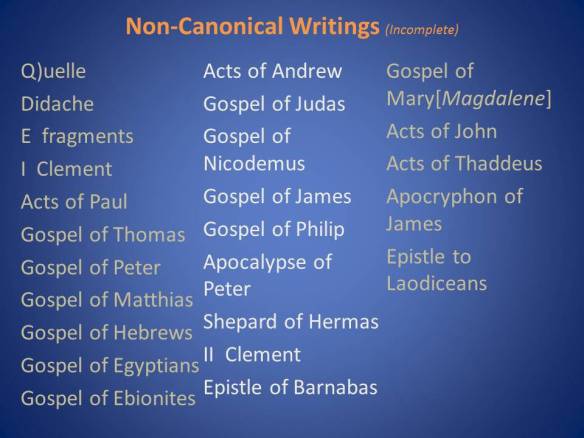 From this muddied, murky, dubious situation of 1st and 2nd-century CE Christianity, what the earliest Fathers debated with approximate dates: 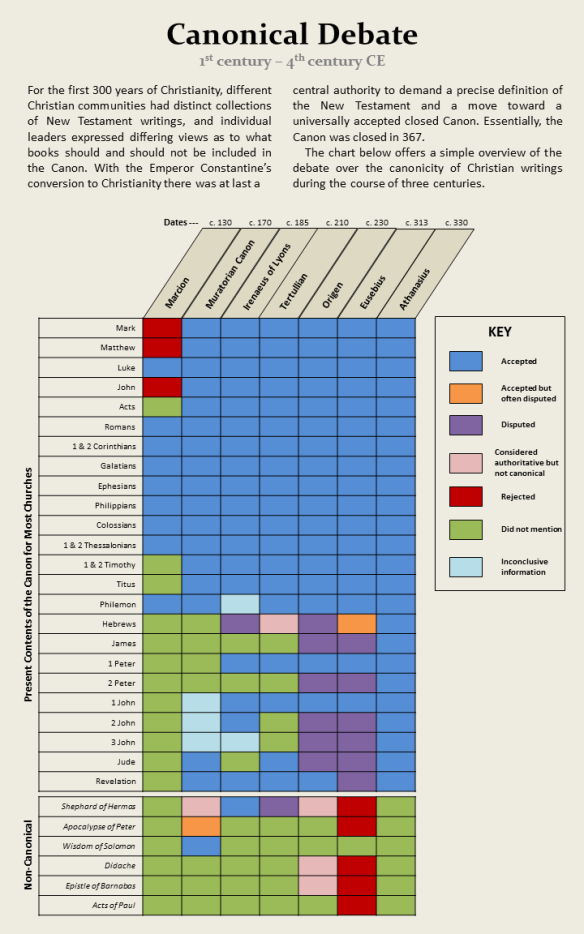 With these table-images it is clearly deduced that the what, who, and why of Jesus the Galilean, after just 30-40 years of his execution, became a symbol of clashing cultures, amalgamated stories and myths, resulting in heated often violent splintering. Saul widens the growing gulf between Judaism and his mystical Hellenism and ultimately with Rome—more anti-Semitism. The sharp contempt was frankly accelerated, not resolved, by Saul of Tarsus, his TL-epilepsy, and personal Shammaite(?) misanthropy.

New Testament scholar Dr. Bart Ehrman of the University of North Carolina at Chapel Hill, in his June 2016 blog-post Was Paul the Founder of Christianity? writes:

But [Jesus’] public ministry was not the core of [later] Christian belief. Instead, the core of Christianity is the belief in his death and resurrection. And this is what Paul preached, not what Jesus preached. So that even if Jesus’ life and teachings are important to Jews or Gentiles, they are not really what Christianity hinges upon.

Because of Saul’s background influenced by and under Jewish Merkavah and/or Heikhalat mysticism, catalyzed by his TL-epilepsy, Saul’s Christ was part Meṭaṭron and part Akteriel of Sophian Gnosticism. Quite intriguingly in Jewish mysticism the natures and purposes of Meṭaṭron (Mithra) and Christ (Saul’s vision) are interchangeable, synonymous as defined here. Note in the Britannica Encyclopedia link the part about “…[Meṭaṭron is] as Enoch after his bodily ascent into heaven. He is commonly described as a celestial scribe recording the sins and merits of men, as a guardian of heavenly secrets, as God’s mediator with men, as the “lesser Yahweh,” as the archetype of man, and as one “whose name is like that of his master.”

Now, compare Jewish Merkavah-Heikhalat mysticism above to Saul’s interpolations of Christ in his epistles…

Woven throughout these mystical concepts is Israel’s ancient Zoroastrian divine spirit, Philo of Alexandria’s divine spirit in his work “That the Worst is Wont to Attack the Better” (IX.30), or here Saul’s Holy Spirit.

Coming up in Part II of Saul the Apostate I will begin to further compare and contrast Saul’s Christ to the obscured Jewish-Jesus and popular Hellenic Gospel-Jesus. Meanwhile, please feel free to again share your thoughts, ideas, or questions below.

51 thoughts on “Saul the Apostate – Intro to Part II”