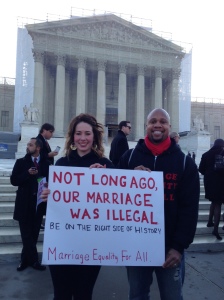 On June 26, 2013 in a landmark decision the U.S. Supreme Court ruled that a provision in DOMA (Defense of Marriage Act), which denied federal benefits to same-sex couples, was unconstitutional.  This decision marks the beginning of the end of religious-based groups and politicians’ using the government, the laws, taxes, and marital benefits to discriminate against same-sex couples and dictate what is and isn’t endorsed by law in private individual homes.  The Supreme Court also dismissed a case by California’s Proposition 8 ballot initiative trying to define marriage as between one man and one woman.  American President Barack Obama applauded the highest court saying the decision strikes down “discrimination enshrined in law.”  Yes, the ruling is a historic victory for civil rights in America.  The seeds of theocracy were thwarted once again!

But the decision, the debate, and its roots are sometimes lost or glossed over in the hype, emotion, and most certainly the mythical history and theological mumbo-jumbo.  The intention of this post is to remind everyone what the controversy is really about:  the separation of church (individual’s faith) and state… as well as how the neurological, biological, and embryonic evidence increasingly show that love, marriage, and sex are clearly NOT defined by or governed by some unanimous(?) religious ideology, theology, or book.  On the contrary, nature seems to dictate truths to humanity as humanity’s understanding evolves.  And in the case of love, marriage, sexuality, Proposition 8, and DOMA “nature” is screaming at humanity to evolve and revamp its understanding of human nature inside nature.

Products of Millions Not Either Or

As I wrote about in my April 2011 post Sexual & Gender Ambiguity: My Once Gross Ignorance, one out of 100 births do not fall under traditional male-female physical identifiers.  On a molecular scale one out of 1,666 births has no clear XX or XY chromosome structure.  In other words, the gender and sexual makeup of these inter-sexed babies (who by the way grow into adults) inherit from their embryonic stage and beyond thousands upon millions of combinations of neurological and hormonal designs.  If sexuality or gender were black or white, then nature would show this consistently by having either hetero males or hetero females, nothing in between.  But clearly this isn’t the case and certainly isn’t any “law”.

For millennia mankind has only understood the visible world, or a world that could be observed and examined by our five senses, including genitalia and breasts.  Not until the last two to three decades has medical science revealed compellingly the incredible neurological-hormonal diversity within each of us.  It is a big part of what makes each of us a unique one in 7.13 billion.  And inter-sexed births are only the VISIBLE evidence of this unimaginable diversity!  Every single one of us have a slightly different feeling about attraction, at any given time in any given circumstance – compounding the complexity even more – and we act upon the attraction differently (if slightly) each time.

For example, some men are more aggressive than others, sadly even to the point of harassment or rape.  That is one extreme in a select group or type of males found all over the world.  Some women have the same level of sexual aggressiveness or sensuality while others have a more reserved approach or interest or frequency.  Many times these attractions are affected by environment.  But just as equally they are influenced by our internal neurological and hormonal blueprint.  And if “nature” can sometimes vary the genitalia, the macro-scale, then it certainly stands to reason that nature can vary the internal designs, the micro-scale.

What does medical science show us?  Three fields of science breach the sexual-orientation issue:  epigenetics, neurohormonal theory, and pheromone theory.

Epigenetics, the study of changes in gene manifestation or expression, over the last couple of decades has revealed that not all traits are INherited but heritable by external or maternal mechanisms; e.g. a pregnant mother shouldn’t drink alcohol or smoke at the risk of fetal defects.  Maternal mechanisms, including ancestral, certainly influence inborn traits even though they are not part of the DNA sequencing.  The point to consider is the diverse multitude of influential prenatal factors.

Neurohormonal theory, the study of embryonic homosexual and heterosexual brain development, has increasingly shown that not only do we ALL start out with the default “female” brain and that we ALL start out sexually as unisex, but during the second trimester there are a multitude of genes triggering or inhibiting hormones and enzymes for both the brain and hypothalamus as well as the sexual organs.  As I wrote in my February 2013 post Toss the 2-D Glasses, structural size differences of the anterior hypothalamus, the organ which regulates sexual behavior, has been observed between heterosexual and homosexual males.  This deserves repeating:  there is indeed a structural size difference measured between hetero and homosexual males.  It is not merely a post-natal adolescent or adult life-choice.  Reread the previous three sentences to allow it to sink in.

The brain registers love as love, despite gender.

Pheromone theory, the study of released airborne molecules which elicit certain social reactions from a member of the same species, has increasingly shown different secretions and excretions will elicit different sexual arousal in homosexual and heterosexual males and females.  These amounts and different chemical makeups (primarily estrogen steroid derivative or EST) are all regulated by the anterior hypothalamus.  This EST regulation has been confirmed in several varying species of laboratory animals, as well as in human males and females.

The brain (or the anterior hypothalamus) registers love as love, despite gender or antiquated traditions.

Whether one thinks the scientific data is preliminary, compelling, or conclusive, at the very least neuroscientists and embryologists agree that sex-genes and sexual hormones are unpredictably developed and expressed under very complex systems.  Therefore, sexuality and orientation cannot be rigidly oversimplified into A and/or B formulas or law.  Nature and the scientific data simply do not reflect that position.

Despite the U.S. Constitution stating “Congress shall make no law respecting an establishment of religion” much of what proponents of DOMA and Proposition 8, like the National Organization for Marriage, construct their stance and subsequent law-making on religious traditions.  I have written numerous posts regarding the fallacy of religious monism.  This also includes the global fallacy of “biblical inerrancy” claimed by Jewish, Christian or Islamic fundamentalists alike.  I will later be publishing another article on biblical inerrancy called The Holy River.

I have also discussed the social dangers in preaching and teaching exclusiveness and elitism, which directly or indirectly fragment unity and nurture ill-will and intolerance to diversity – diversity confirmed in a multitude of life systems, Earth systems, atomic and subatomic systems, and cosmic systems, but even more importantly in spiritual or metaphysical systems!  Without having to repeat much of what I’ve already covered, this is a short list of those related posts…

Origins of Judeo-Christianity and Its “Holy” Bible:
Constantine: Christianity’s True Catalyst/Christ
The Suffering Messiah That Wasn’t Jesus
Canaanites Killed & Removed From Native Lands
Correcting the Gospels of Jesus
Whoops! Not God’s Wrath After All?

Unquestionably nature, or more precisely human nature, cannot be “cured” or “cleansed” of what is perceived morally as right or wrong.  Nature is oblivious to morality and we should give eternal thanks for that… treating all humans as our equal.

8 thoughts on “A Supreme Decision”