The black market is brutal, exploitative, and corrupt. Nothing is off-limits; everything is for sale. Any hints of morals and ethics are non-existent or false. What you buy may not be what it once was or what it now seems. How one justifies their involvement in an entire global network is ignored or never introspective. Workers, suppliers, U.S. employers, foreign sellers, customers in all countries, no exceptions—and the domestic or foreign law-enforcements hoping to keep it tamed and in balance while unaware their own native people, governments, and businesses fuel the ugly, black machine—the experiences, the victims in ALL stages of this inhumane, violent, monetary commerce—is a hidden world out in the open. One way or another it effects us all. All of us are responsible and like it or not we are more accountable than the resident, native-born and wealthy American can fully comprehend. As a whole, our U.S. values equate in various legal and illegal “currencies” of supply and demand. They are the literal blood that pumps life into BU Inc.

Yes, historical U.S. foreign policy with domestic big business sired a bastard monster which is now cannibalizing its family. Though the Age of Imperialism, expansion, colonialism was by the European Big Nine “fathers” between the 15th and 19th centuries — Belgium, Great Britain, France, Denmark, Holland, Spain, Portugal, Russia, and Sweden — at the turn of the 20th century the hungry United States became the belligerent step-son in family imperialism. The 1900 Presidential campaign and election in the wake of victory from the Spanish-American War and resulting prosperity assured the Red, White, & Blue was embraced into the Imperialist family tree.

Republican-candidate William McKinley ran a campaign ticket of unfettered trade and bigger empire. Democratic-candidate William Jennings Bryan ran one of anti-imperialism and “Free Silver.” However, due to the country’s renewed prosperity under McKinley’s first-term coupled with America’s general approval of the Spanish-American War and victory, as well as acquiring and annexing territories in the western Pacific and Latin America, the McKinley-Roosevelt ticket managed a comfortable win over Democrats Bryan-Stevenson. Yet, these imperialist “victories” came at a cost and further problems for the United States, especially in Latin America in the following centuries. The most ideal whistle-blower to explain the U.S. appetite for expansion and global wealth, no matter the human cost, is from one who was actually there through it all from the beginning:  Major General Smedley D. Butler, USMC (ret):

Major General Butler mentioned Nicaragua and Guatemala. These two Central American nations, along with a few others, are the unstable hotbeds today for drug cartels and trans-generational government corruption fueled and sired to-date by 119-years of American-European exploitation.

Retaliation by U.S. Army on Filipinos

In 1901 President McKinley was assassinated at, of all places, the Pan-American Exposition in Buffalo, NY. The assassin was protesting American military atrocities in the Philippines and sociopolitical inequality in the U.S. by the wealthiest enriching themselves with McKinley’s government exploiting foreign and domestic, impoverished workers and civilians. This included Nicaragua, Guatemala, and Panama, among several others. Why Panama? Since 1513 European explorers from the original Nine Imperialist Fathering empires saw the enormous commercial benefits of a canal for their coffers and treasuries. By the 1820’s U.S. businessmen and their corporations lobbying Congress wanted European powers out of all Americas. They accomplished this by pushing the legislation and approval of the Monroe Doctrine. Many in Central and South America viewed this doctrine as self-appointed permission to bribe native dictator-puppets or replace one imperialist foreign sovereign with another:  the United States. This Pan-American perception was by no means outlandish and unfounded.

Once France tried and failed to complete a canal through Panama in 1889, interest by the U.S., President Teddy Roosevelt (also a strong Imperialist), and Congressional lawmakers and corporate lobbyists looked into building the canal in Nicaragua. But heavy pockets from various business interests in Europe and the U.S. wanted the canal in Panama. Securing the construction of the canal via the Hay–Bunau-Varilla Treaty and Panamanians winning independence from Colombia (more tension for the U.S.) garnered the apropos term of gunboat diplomacy: the constant U.S. financial, military presence, sovereignty and exploitation throughout the western Pacific and Latin America. Little did Americans back home know that this world perception of U.S. foreign policies and imperialism would last through the entire 20th century and into the 21st.

From 1903 until 1989 Panama was a struggling pawn-Republic dominated by commercial oligarchies influenced by many world powers—none bigger than the “prosperous” U.S. business expansions. These were known as the Banana Republics with Congressional lobbyists from U.S. companies dependent on hard goods, cheap labor, and crude oil and Presidents bound to their party’s corporate promises and politics. Enter Manuel Noriega as early as 1981 with America’s new insatiable coast-to-coast craving for illegal drugs out of Central and South America.

Lords and Kings — Mastering Supply and Demand, Distribution and Buyers

Today almost half the world live in poverty, on about $2.50 per day, and around 1.4 billion live in extreme poverty on less than $1.25 per day according to United Nations Development Programme’s “Human Development Report, 2014.” Between 1903 and 1990 world poverty and all the consequential problems, crimes, and corruption connected to it was much worse than those figures. Therefore, young girls and boys who grow up in those regions and countries where poverty, crime, and corruption are worse many learn all the tricks and trades of the Hustle. Morality, God, and ethics mean nothing when one is merely surviving (barely) and living day to day, hand to mouth, and night to night. Hoping to see the sun in the morning or some nights to be relieved of the insane hustling-game at the end of a gun-barrel was and today still is the popular Central-South American attitude. Lots of these kids grew up to be drug lords, military elite, and trade kings. Birth-rights and zip codes had little and a lot to do with survival or success in their world and little or a lot to do with death and/or prison in other’s worlds. What’s the difference. They have, I don’t. I have, they don’t. The better the Hustle, the better the life… no matter what side of the flag, fence, wall, river, or canal you are on.

Whether one was Henry Meiggs or General Manuel Bonilla, President Dwight Eisenhower or Jacobo Árbenz, President Ronald Reagan and Daniel Ortega or Manuel Noriega, or any number of investor-states utilizing various 20th and 21st century “free trade” agreements or treaties—i.e. DR-CAFTA, CTPA, PTPA, and NAFTA—lucrative for the U.S., Canada, and bilateral or multilateral FTA’s for the European Union, the hustle remains the same. These corporate interests with their lobbied governments in bed with Caribbean, Central and South American puppet-governments and leaders, all of it championed as “economic prosperity.” The modern developed nations, lead by the United States, have now fathered, sired a humanitarian crisis and BU Incorporated. For additional details read this excellent and poignant 2014 briefing by the Institute for Policy Studies, “What ‘Free Trade’ Has Done to Central America.”

Some of America’s foreign economic, military, and diplomatic interference over the last five to six decades have seen and made the richest, most violent hustlers, drug Lords and crime Kings blossom from the Central and South Americas. Here are just a few others (Pablo Escobar is excluded; he’s very well–known) from an extensive list of first and second generation BU Inc. Lords and Kings:

Back in 2004 and even as far back as 1998 citizens of all these Central American nations publicly protested against FTA’s because they favored foreign interests, not their own. From the IPS:

[The people, economists, and legal experts] warned of the unemployment, poverty, hunger, pollution, diminished national sovereignty, and other problems that could result if DR-CAFTA were approved. But despite popular pressure, the agreement was ratified in seven countries—including Guatemala, Nicaragua, El Salvador, Honduras, Costa Rica, the Dominican Republic, and the United States.

Contrary to the promises of U.S. officials—who claimed the agreement would improve Central American economies and thereby reduce undocumented immigration—large numbers of Central Americans have migrated to the United States, as dramatized most recently by the influx of children from Guatemala, El Salvador, and Honduras crossing the U.S.-Mexican border last summer. Although most are urgently fleeing violence in their countries, there are important economic roots to the migration—many of which are related to DR-CAFTA.

One of the most pernicious features of the agreement is a provision called the Investor-State Dispute Settlement mechanism. This allows private corporations to sue governments over alleged violations of a long list of so-called “investor protections.”

The most controversial cases have involved public interest laws and regulations that corporations claim reduce the value of their investments. That means corporations can sue those countries for profits they say they would have made had those regulations not been put into effect. 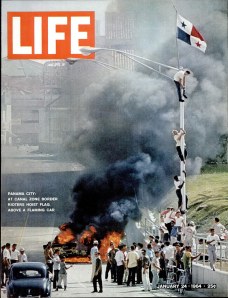 These types of lawsuits have financially wrecked poor Central American countries often struggling to provide basic quality of life programs and services. These imposed conditions have greatly tempted the weak or corrupt governments away from domestic accountability and invoke policies favoring transnational corporations abroad in the U.S. or Canada. In certain circumstances U.S. Presidents, Congressional lobbyists, and/or corporate trade-investment partnerships push for clandestine military interventions—e.g. Lt. Colonel Oliver North—to stabilize or destabilize foreign governments depending on the most profitable U.S. interests. However, these operations, agreements, and policies are only part of the public domain or veiled and patriotically manipulated mechanisms in the “restricted” public domain. This accessible domain is only the stained dirty side of a much darker, black underworld side.

In the upcoming Part II of Black Underworld, Inc., we find after closer investigation that the dark criminal domain and the public domain discussed above actually stimulate each other’s livelihood in a largely symbiotic dynamic. But at what costs in the short, mid, and long-term? And costs to who specifically?