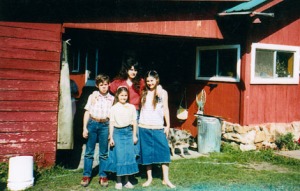 On August 21, 1992 Samuel Weaver and his father Randy Weaver along with partially adopted Kevin Harris walk out of their remote Idaho cabin on Ruby Ridge to see why the family dog was barking incessantly.  Suspecting there was an animal that “Striker” had sniffed out, Sam, Kevin, and Randy take their rifles to investigate.  Daughter and sister, Sara Weaver remained in the house with her mother Vicki, little sister Rachel, and infant sister Elisheba.  Minutes later several rifle shots rung out.  When Randy and Kevin returned to the house stunned, they informed Vicki and the girls that little Samuel was dead and they needed to go retrieve his body.  Striker, the Labrador retriever had also been shot dead.  Harris and Randy were unaware that one of Kevin’s three fired bullets had killed U.S. Marshall William Degan when bullets from everywhere were flying. 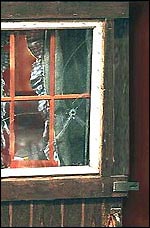 About 15 minutes had passed.  Randy, Vicki, and Kevin Harris picked up Samuel’s limp body where he had fallen and stored it in a nearby shed next to their cabin so not to traumatize the girls.  Hours later the Weaver’s wanted to view Samuel’s body, pray over it and decide how to bury him.  Father Randy, daughter Sara, and Kevin walked out of the cabin toward the small shed which held the body; all of them carrying rifles.  Suddenly another shot rang out and Randy Weaver heaped over and screamed for Vicki.  All three of them turned and ran quickly back to the cabin’s front door.  Hearing the gun shot and Randy’s pain, Vicki Weaver ran to the front door, clasping baby Elisheba to her chest, holding the door open for their refuge.  As Harris was approaching the doorway, another rifle shot rang out.  The high-powered bullet shattered the door’s window pane, passed through Vicki’s head barely missing the baby, then penetrating Harris’ left arm and chest.  Vicki dropped to her knees still holding Elisheba, moaned in agony for about 20 seconds uttering “Yahweh” a few times, and collapsed.  Writhing from their gaping wounds, Randy and Kevin managed to get back over to Vicki’s body but she was dead.  Her face was unrecognizable.  This caused Mr. Weaver and all his daughters to sob uncontrollably.

At the end of the day a 14-year old boy, a Federal Marshall, and a mother lay dead.  All deaths were certainly unnecessary and beyond a shadow of a doubt quite avoidable.  But my first two paragraphs do not tell the entire story from all possible angles.  There is no need for my decades late report of these well-known events.  The facts of the Ruby Ridge siege — aside from Kevin Harris’ testimony of the first events with Samuel and Striker — are available to the public in many forms all portraying slight variations of what took place and how.  Ultimately the case made for Randy Weaver against the U.S. Federal agencies by defense attorney Gerry Spence was the correct verdict.  It is also well publicized that the Federal agencies and on-sight special agents clearly did not “serve and protect” according to their duties and the U.S. Constitution.  However, due to the overshadowing Federal agencies glaring wrong-doings, there is another aspect of this tragedy that has not been given much consideration. 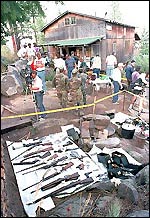 Weaver’s weapons cache from inside the cabin

The fuse to this ticking time-bomb in August 1992 had been lit and set in motion days, months, and perhaps years earlier by Mr. and Mrs. Weaver.  First, what type of gun safety had been taught to a 14-year old boy and 16-year old girl and when did it start?  Was the sanctity of human life taught to this boy and if so, why did the boy fire multiple shots at a person he had no clue who they were OR if they had actually shot his dog (intentionally or by accident), and when multiple rifles are everywhere outside AND inside the Weaver cabin?

Secondly, if one argues the heat-of-the-moment or fog-of-war scenario for an immature scared 14-year old boy, then why was he toting a loaded rifle in the first place?  That is the perfect reason not to arm little boys and girls EVER…even if Striker had found a furious animal!  Yet, Samuel didn’t stumble upon an animal, he came armed and within 10-feet of a U.S. Marshall.  Also, Randy Weaver had increasing run-ins with Federal law-enforcement and agencies, each time becoming more threatening and short-tempered with their authority.  Surely being a former Army Green Beret he could have anticipated more tactical pressure from his self-perceived enemies?  With that said, arming his 14-year old son and 16-year old daughter sounds eerily reminiscent of Hitler’s SS youth.  Coincidentally, Randy Weaver then and to this day hints or speaks derogatory about non-caucasian ethnic groups. 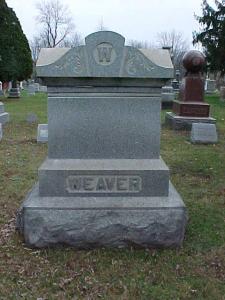 Finally, Vicki Weaver and Randall Weaver had both grown more and more angry with their surrounding church members, friends, and American society and government for becoming in their eyes weak-willed complacent Christians in a hell-bound world.  In the years leading up to August 1992, Randy and Vicki separated themselves and their kids (home schooled in strict biblical customs) from mainstream society.  In fact, by 1978 Vicki Weaver had begun studying and embracing the Amish-Mennonite separatist self-sustaining way of life.  I recently wrote a blog about the Amish and all extreme separatist groups in America and around the world:  Collaborative Ineptitude.  Having studied over two years in a theological seminary learning the “Protestant” Old and New Testaments backwards and forwards, what has often astonished me about hyper-separatist groups/denominations are how the theme of reconciliation as lived and taught by Jesus/Yeshua (according strictly to the canonical Gospels) is ignored or overlooked by separatist.  The canonical Gospels clearly show Jesus/Yeshua spent a large majority of his ministry in and among the social outcasts, diseased, unclean, and unGodly!  What Vicki and Randy Weaver also failed to recognize was that most Amish do not tote around one, two, or three guns per person, much less own them.  Ironically, Yeshua had more problems with the Jewish-Zealots (ancient Jerusalem’s version of modern religious militants) than he did with moderate Jews and Gentiles.

In 1992 and today it is a common statistic that most personally owned guns end up hurting or fatally wounding those in the home, not criminals or hyper-perceived apocalyptic enemies.  In later interviews on the Ruby Ridge tragedy, Sara Weaver often comments about how utterly alien the “outside world” was for her when she was sent to extended family members during her father’s trial.  She adds how very ill-prepared she was to cope with the hell-bound world along with the tragic death of her mother and little brother!  Now married and a mother herself, Sara does not speak fondly about a life of isolation; understandably so.  Sara Weaver is now an active advocate for compassion and forgiveness.

I remind readers that what the Federal agencies and their agents did at the Weaver’s cabin was entirely wrong and unnecessary.  Obviously so in light of Waco and the Koresh compound.  Worse still, with similar anger as Randy Weaver, Timothy McVeigh used Ruby Ridge and Waco as his battle cry to justify killing 168 innocent people in his Oklahoma City bombing, 19 of which were just as young or younger as Samuel Weaver.

In light of Ruby Ridge and Waco, I hope Americans realize that hateful separatism, stockpiles of weapons, or violence —  in the absence of relentless informed diplomacy — is always and will be unimaginably bloodier, even sacrificial of children for a cause their little minds can’t fully comprehend.  When religion becomes militant the distinction between “righteous” and say Islāmic terrorists flying jet-liners into skyscrapers becomes so blurred it’s impossible for any sane person to become inspired to civil reform.  I hope Randy Weaver has grasped the big picture, now that it is too late.  Something is terribly wrong when we are arming boys and girls that are barely teenagers. 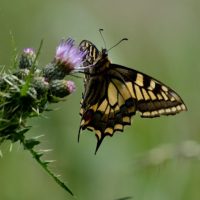 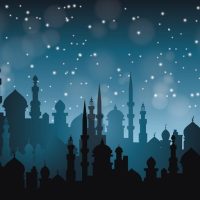 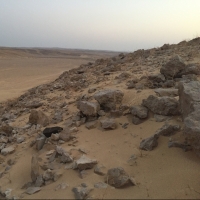 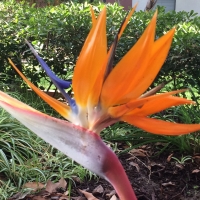 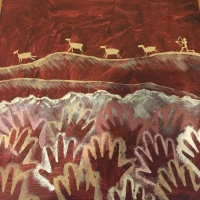